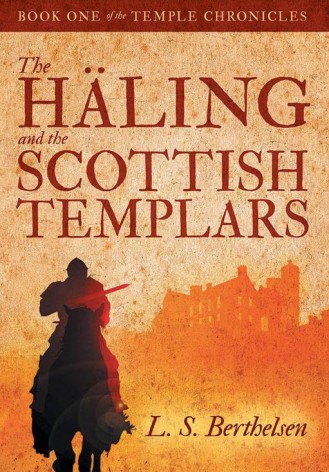 In this historical fantasy, set in the thirteenth century Scotland, a young Templar squire and his sister are launched on a quest to protect Celtic treasures, known as the Häling, from dark forces. Their adventures take readers on a roller coaster ride of emotions and thrill as brother and sister are drawn into a precarious quest.

Book One of the Temple Chronicles begins the gripping saga of self-discovery, filled with mysterious mentors and magical creatures. This book revolves around the maturation of the human spirit. Children and nations are pressed into growth when war reaches a critical flashpoint. Noble Scots gather Häling before the opportunity can arise for them to be plundered by self-centered rulers. These ordinary characters join forces with extraordinary mentors to accomplish heroic deeds.

In Scotland in the spring of 1296, a ragged band of Templars seek refuge for a gravely wounded seneschal, a high-ranking Templar officer. As England invades Scotland, the Templars devise a dangerous plan to prevent the destruction of the Häling, a collection of priceless Celtic treasures, manuscripts, and masterpieces.

As the mysterious Lord Eagan travels with his companions—and his wyvern, a tiny magical creature—to fetch the Häling, Adam, a 13-year-old Templar squire, finds himself in the midst of the intrigue. He is chosen to carry a crucial message to set the plan in motion, and his older sister, Hannah, jumps at the chance to trade her mundane life for a more precarious fate. But only integrity, noble character, and discretion will save the Häling from ruin.